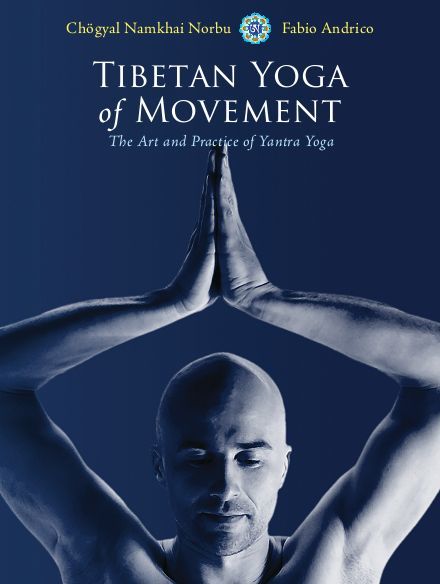 SKU:
CHF 45.00
CHF 45.00
Unavailable
per item
This is not your typical book on yoga.Many of us are familiar with yoga and it’s many forms. Whether you have experienced a Hatha Yoga class in a gym, enrolled in an Iyengar Yoga session with blocks and straps, or sweat it out in a Hot Yoga class, you are probably familiar with at least some type of asana.

Tibetan Yoga of Movement: The Art and Practice of Yantra Yoga is written by Chogyal Namkhai Norbu and Fabio Andrico. Norbu is an internationally known Buddhist teacher and author and Andrico is one of his closest students as well as a Yantra Yoga expert that is responsible for bringing this form of yoga to the West in the early 1970’s.

Yantra Yoga originates from Tibetan Medicine and uses many of the principles that deal with this type of healing.Like most yoga, it has a general warm up (Tsigjong) preceding your session,a portion of intense poses (Yantras) aimed at increasing flexibility and strength, along with recovery poses to soothe both mind and body. However, this unique Yoga has a strong focus on breath work or Pranayama, combined with poses (Lungsang) and comes with detailed instructions on how to incorporate this in your practice.

The book further explains the male/female aspect of Tibetan medicine and how it relates to health, guiding you through variations depending on your gender. Breath work is a crucial detail in this form of Yoga, and the authors give precise instructions as to how to use breath to facilitate your practice and why it is important.

Timing the breath work with the poses takes some practice, at first.

All of the poses are clearly displayed in color photos and alternate poses are given for people who have issues with flexibility. It includes a graph after each sequence that lays out all of the inhalations and exhalations for each portion. One part that I found helpful was that the authors gave a variety of sequences to  practice with variable time frames.

You can pick up this book and attempt a short seven minute routine to get a feel for this flow, or work even longer with an 80 minute session, which makes it accessible to anyone. Throughout the text and included in the appendix is a list of ailments and poses that are recommended for each.


Yet, the book doesn’t stop at just poses and alignment.They delve further into the nuances of Tibetan Medicine and theory. This tradition pre-dates Buddhism, and has been influenced by Ayurveda, Chinese, Byzantine and Persian medicine. It’s theory is that the human body functions with three main energies: wind, bile and phlegm. Illnesses arise when these energies are out of balance and an array of dietary and behavioural treatments are prescribed (such as Yantra Yoga) to alleviate these symptoms and promote healing.

Tibetan Yoga of Movement gives an all encompassing view of approaching the mind and body through breath work and movement while introducing the practitioner to Tibetan healing concepts. This is an amazing insight into a practice that is traced back 4000 years.

While this book is aimed at being a basic introduction, it gave me a good overview of the core concepts that are the basis for this practice and presented it in a way that is user-friendly and straightforward.